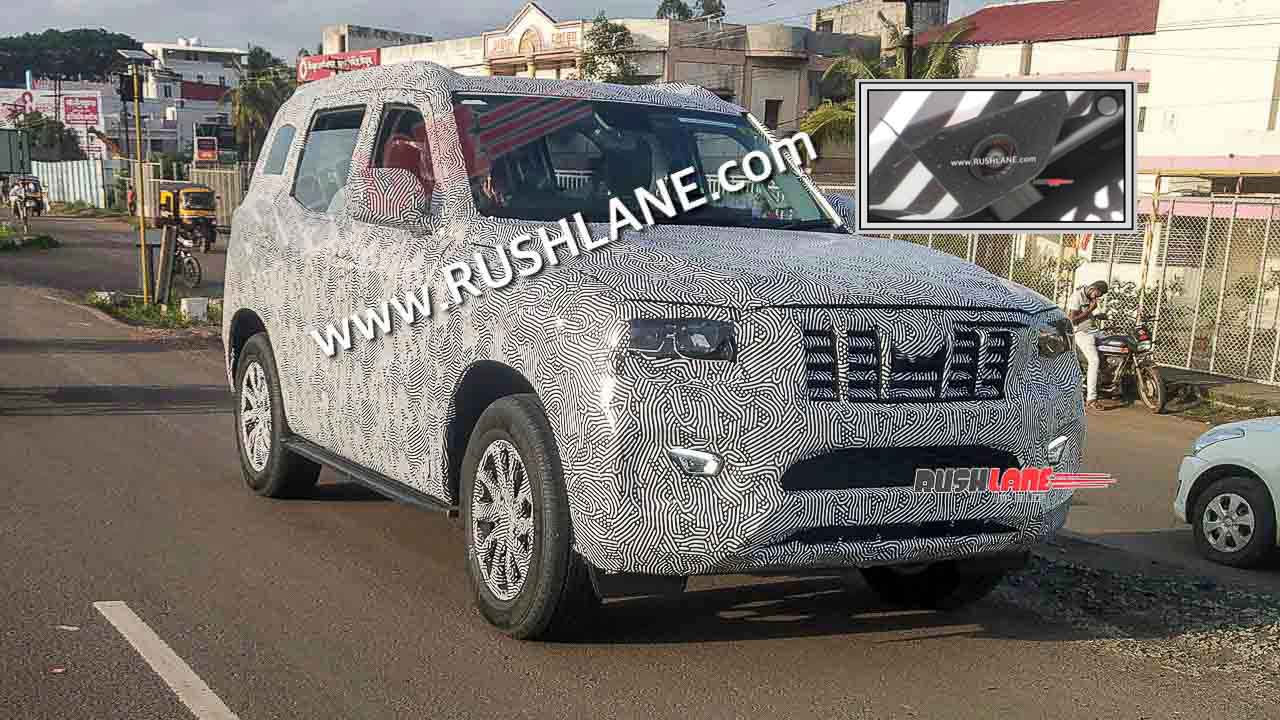 The third generation Mahindra Scorpio has been under testing for almost 2 years now – as its launch date approaches, more spyshots and insights about the SUV are surfacing online.

Recent spyshots have confirmed the presence of ceiling-mounted speakers, as seen on the 2020 Mahindra Thar. Via spyshots, the presence of an electric sunroof can also be confirmed, but it looks like it will not offer a panoramic sunroof. Or if there will be one, it might be limited to only the top-end trims, but at least the test mule didn’t have one.

The latest spy shots reveal the presence of a front camera under the front logo, which is placed at the center of the grille. This camera is part of the 360-degree parking camera setup that will be available with the new Scorpio. Yes, the new 2022 Mahindra Scorpio will get 360 degree parking camera feature.

Thanks to earlier spy shots, we also get to see a new dashboard design, a larger touchscreen infotainment system and a new multi-function steering wheel. The interiors will mostly get three color tones, creamy white for the side-panels and roof, black for the dashboard and black and brown shades in the leatherette upholstery.

In terms of features, the 2022 Scorpio is expected to be a fully loaded product. It should have features like dual-zone climate control system, connected car tech, push-button start stop, keyless entry, cooled glove box, wireless smartphone charging, semi digital instrument console (with a mid and analog dial) and more. !

The 2022 Scorpio is expected to come with a number of safety features which should ideally help it get a good NCAP rating. Some of the expected features include multiple airbags, auto wipers, auto headlamps, traction control, ESC, EBD, ABS, hill-start assist, rear parking camera and more. Like its predecessor, it will be based on a ladder-frame chassis, though as per reports, Mahindra has redesigned it to improve the overall structural strength.

The third generation Scorpio will be offered with two engine options. Incidentally, both of these will be retuned versions of the offerings currently available on the Thar. These will include a 2-litre Turo petrol motor and a 2.2-litre turbo diesel mHawk engine.

Mahindra has already confirmed that while the engines will be identical, the Scorpio will get them in better condition. Transmission options on the Scorpio will mostly include a 6-speed AT and a 6-speed MT. In the past, Mahindra has offered the Scorpio in a 4WD configuration, though it remains to be seen whether it will offer it in the 2022 model as well. However, it is highly likely that like the previous generation, the 2022 model will also primarily be an RWD unit.

Post launch, the Scorpio will not have a direct rival as there is almost no other ladder-frame SUV available around the same price band. However, due to its positioning and price segment, it will compete with the Hyundai Creta, Kia Seltos, Skoda Kushak and the upcoming VW Taigun.

Earlier, the Scorpio was expected to launch in 2021. However, due to the pandemic, the ongoing semiconductor shortage and several other factors, the launch is now expected to take place in 2022. Pricing is expected to start around INR 12 Lakh. Mark up and go all the way up to INR 18 Lakh (ex-showroom)

Share
Facebook
Twitter
WhatsApp
Previous articlePhotoshoot of Sidharth Malhotra and Kiara Advani, amidst the news of affair, all eyes were on these pictures
Next articleAkshay Kumar had told about Kapil Sharma’s class, then what happened when the comedian touched his feet
RELATED ARTICLES
Automobile