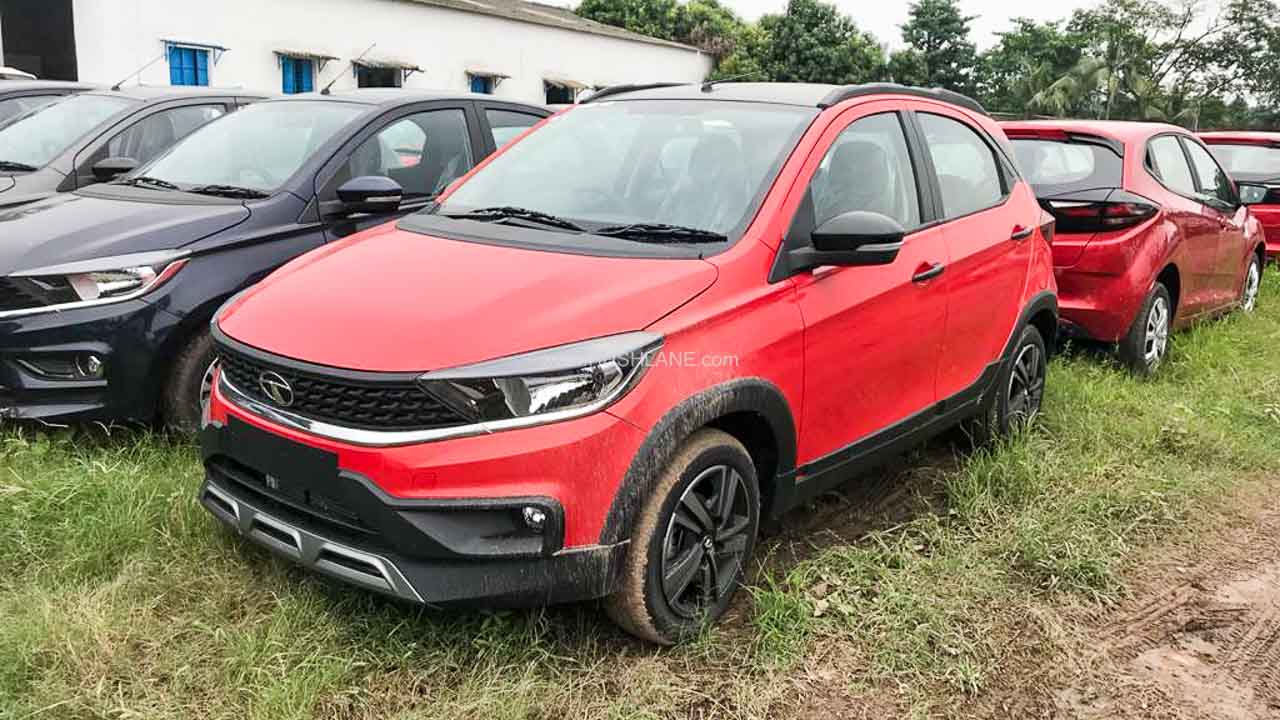 The updated Tiago NRG will be powered by a 1.2L 86hp petrol engine with manual and AMT gearbox options

Tata Motors is all set to launch the new generation Tiago NRG on 4th August 2021. It is a facelift of the 5 seater hatchback that was first launched in India in 2018 and was discontinued in January 2020.

The Tata Tiago NRG is being teased ahead of its launch and several design elements and SUV-inspired features have surfaced on social media. The early examples of the Tiago NRG have also made their way to the company’s dealerships. The credit for the latest spy shots goes to team-BHP member aenkay91. It shows the car in a red color scheme.

The hatchback gets a dual tone, sporty stance with a black roof. It also gets black cladding on the sides and wheel arches. The black color scheme continues at the rear above its door handles, electrically adjustable ORVMs with auto fold function, B and C pillars and its tail lamps.

The Tiago NRG will also receive a refreshed bumper design and will ride on new 14-inch dual-tone alloy wheels in a 5-spoke design. Tata will offer several new color options for the NRG variant. A metallic green shade has also been teased.

There have also been minor changes in the dimensions as compared to the regular Tiago. The NRG is now 3,793 mm in length, 1,665 mm in width and 1,587 mm in length. Its wheelbase measures 2,400 mm, though the ground clearance has been increased from 10 mm to 180 mm.

The interiors of the Tata Tiago NRG are similar to the top spec Tiago variant in many respects but differentiate themselves with a few differentiating factors. It gets black seats with NRG badging and tri-arrow pattern on the seat upholstery. Features include a 7-inch touchscreen infotainment system with navigation, Android Auto and Apple CarPlay, automatic AC, steering mounted audio controls, 8-speaker surround sound system, height-adjustable driver seat and keyless entry.

The Tiago NRG will also get a host of safety features. These could include dual airbags, auto speed sensing door lock, corner stability control, rear parking sensors with camera, ABS and EBD. It is based on the Tiago which has got a 4 star safety rating.

The engine specs on the new Tiago NRG will be the same as that seen on the standard Tiago. It will be powered by a Revotron 1.2 litre, 3 cylinder petrol engine that makes 86 hp power at 6,000 rpm and 113 Nm of torque at 3,300 ROM along with a 5 speed manual transmission and 5 speed AMT. Considering the various updates on the facelifted Tiago NRG, it could cost around Rs 30,000 more than the standard model. Tata Motors has increased the prices of all its cars from today.