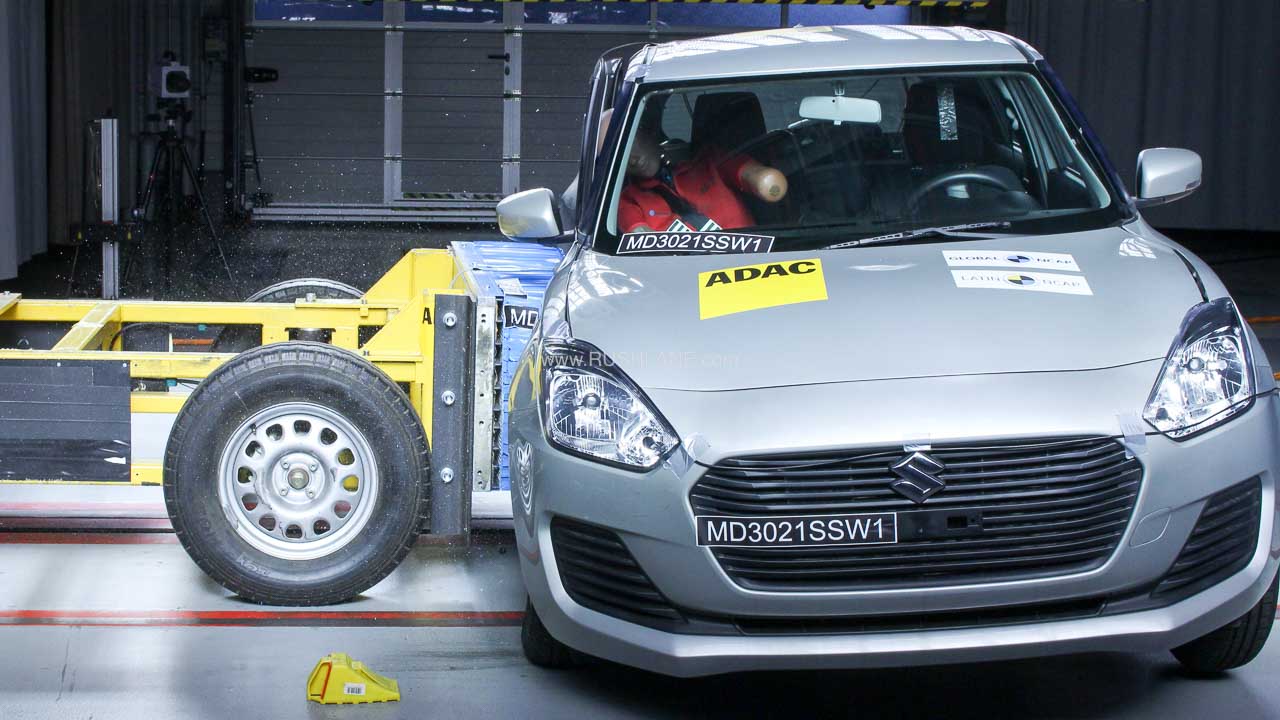 Conversations regarding car safety ratings have increased in developing countries, partly due to the many tests conducted by the regional and global NCAP. Recently, Latin NCAP tested the existing Renault Duster and Suzuki Swift models, which are sold in Latin America.

Sadly, the results have been extremely disappointing as both the vehicles achieved poor 0 star safety ratings in the latest 2021 NCAP test. The Swift is made in India at the Gujarat plant as well as in Japan while the Duster is made in Chennai, India as well as Romania. It is to be noted that the Maruti Swift and Renault Duster on sale in India have received 2 Star and 3 Star Global NCAP safety ratings respectively.

Similar to Duster, we are not sure about the exact origin of the crash tested Swift, however, it is believed to be an India/Japan made unit. The hatchback achieved 15.53% in the adult occupant box, 66.07% in the pedestrian protection and vulnerable road users box, 0% in the child occupant box and 6.98% in the safety assist box. As per NCAP, the test results are valid for both hatchback and sedan body types.

Latin NCAP poor 0 star safety rating attributed to poor side impact protection, low whiplash score, lack of standard side head protection airbags, Suzuki not recommending CRS (Child Restraint System), lack of ESC and use of standard lap belts at the rear gives to. center seat. Unlike the Latin-American model, the Swift sold in Europe gets 6 airbags and Electronic Stability Control (ESC) as standard.

The country of origin of the Renault Duster unit is not explicitly mentioned, however, it is a known fact that Dusters sold in Latin America are produced in either Romania or Latin America. Hence, the crash-tested model is also expected to be manufactured in either of the two locations.

The Duster sold in Latin America gets 2 airbags and ESC (Electronic Stability Control), though despite both, it managed to achieve a 0 star safety rating. The globally successful SUV achieved 29.47% in the adult occupant box, 50.79% in the pedestrian safety and vulnerable road users box, 22.93% in the child occupant box and 34.88% in the safety assist box.

The Latin NCAP report highlights that the Duster sold in Latin America lacks side body and side head protection airbags, which are offered as standard in models sold in Europe. Renault/Duster is not the only company that offers different levels of safety equipment for different markets. Sadly, most global OEMs have a similar strategy for most developing markets, primarily to cut costs and make their offerings attractive to customers.

In the frontal crash test, the Duster also showed unstable construction performance and associated fuel leakage. In the side impact test, the high intrusion of the B-pillar and an open door further suggested that the car is not safe. The Latin NCAP recommends that Renault correct the issue of the potential for fuel leakage in the event of an accident and also improve the door design to avoid the risk of ejection in case of a side impact.

Latin NCAP was launched in 2010 to test and evaluate the crashworthiness and safety ratings of cars sold in Latin America and the Caribbean. So far, Latin NCAP has published crash tests and results of over 135 models. A similar program has been proposed for India which will be baptized as India NCAP.

Share
Facebook
Twitter
WhatsApp
Previous articleAkshay Kumar wanted to bring down Vaani Kapoor on the sets of ‘The Kapil Sharma’, Archana Puran Singh opened the poll by making a video
Next articlePriyanka Chopra will choose between Bollywood and Hollywood? Answer given in video
RELATED ARTICLES
Automobile