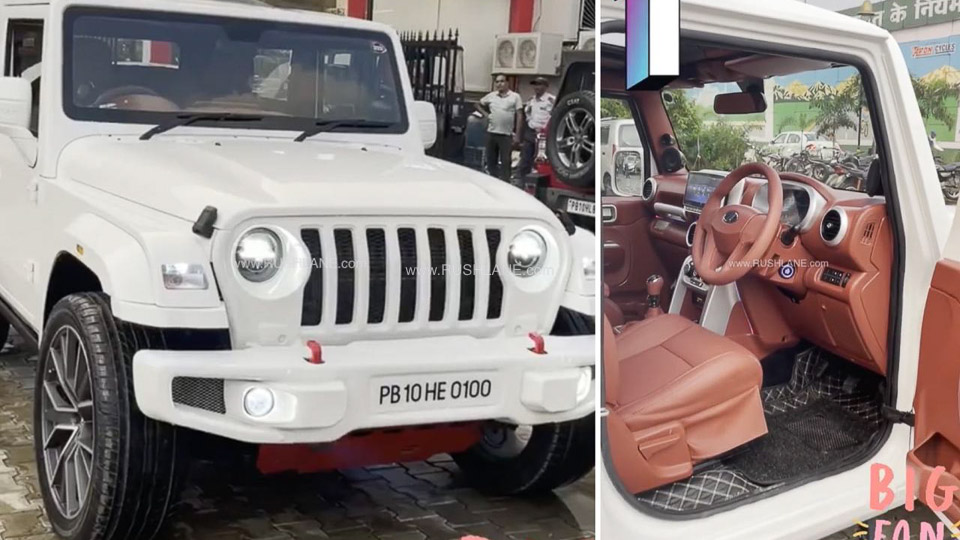 Mahindra has seen tremendous success with the second generation of Thar. The unprecedented volume of pre-bookings has meant that the manufacturer has not been able to clear its backlog despite cutting down on the number of variants on offer and increasing the production capacity of the company’s plant in Nashik.

Like the older generation Thar, the new Thar too has been a frequent visitor to many aftermarket workshops. We have already seen several cases of custom modification works done on the new model. In the latest example, we come across the first Thar draped in pure white colour.

The custom paint job has been done by Sikand Car World Pvt Ltd and a video showing the white Thar has been uploaded to YouTube. As seen in the short video clip attached below, Aftermarket Workshop has rendered a Thar with a white theme on its exterior. Almost every panel that sees out of the cabin has been dipped in pure white. However, the cosmetic updates don’t end here.

Even the rectangular ORVMs have been painted completely white. The stock grille has been replaced with a sleeker and more traditional seven-slat grille to resemble its distant cousin the Jeep Wrangler. The original 18-inch alloys have been replaced by Audi Spyder alloys with larger 21-inch units. These are wrapped all around by wide cross-section and low profile tyres.

Another impressive addition is the automatic side step that automatically takes position when one of the doors is opened and tucks neatly in when the doors are closed. This helps the boarders climb inside the cabin and also prevents the SUV from compromising on the break-over angle. This feature is currently available only in select luxury SUVs.

Major changes have been made inside the cabin as well. It gets a brand new red leatherette upholstery which looks very premium. Pink colored ambient lighting can be seen on the dashboard while the stock touchscreen infotainment unit in the center dash has been replaced with an aftermarket unit. Apart from these, the center console has been finished in silky silver which gives a nice contrast to the cabin.

The most attractive addition is a dual-pane sunroof. The front of the sunroof is a regular electric unit while at the rear is an entry-level popup sunroof unit that can be opened slightly from the inside via a hinge mechanism. If and when necessary, this glass panel can be easily removed by undoing a few screws.

Mahindra offers the Thar in two engine options – a 2.2-litre mHawk diesel unit and a 2.0-litre mStallion turbo petrol unit. The first makes 130 bhp and 300 Nm of peak torque while the latter makes 150 bhp and 300 Nm (320 Nm in AT) of peak torque. Transmission duties are performed by either a 6-speed manual or a 6-speed torque converter automatic gearbox. A 4×4 drivetrain with a low-range transfer case is offered as standard.